USC has purchased a life science building on the school’s Health Science Campus from Doheny Eye Institute for $57 million. The property totals 75,272 square feet and four stories and it is adjacent to USC Norris Hospital. This was the last remaining building on the campus that was not owned by USC.

This was the first time the building has been for sale in its history. The property was developed in 1976 as a build-to-suit for Doheny Eye Institute, and it has since served as the headquarters for the company. With this sale, Doheny Eye Institute is relocating to a 115,000-square-foot building. They aren’t alone. General Motors is moving and expanding its Advanced Design Center from North Hollywood to a new location in Pasadena. The firm has invested more than $71 million to create a new 149,000-square-foot campus in Pasadena for the Advanced Design Center operations. The new location will expand capacity and create new jobs in the area. The new location is closer to technology centers that will help to accelerate GM’s lofty goals, which include zero crashes, zero emissions and zero congestion. 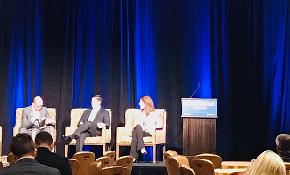 The goal of using data analytics in healthcare, according to panelists at GlobeSt. Healthcare Real Estate, is to help understand where the competition is, where a client can grow, where to find new patients, and more.