Powered by robotic technology, micro-fulfillment centers can be in a parking lot or in the back of an existing store.

Grocery is the last frontier of e-commerce expansion. While online shopping has rapidly attracted consumers and forced the evolution of retail, online grocery shopping has yet to usurp a significant portion of the market.

Back in 2019, only about 3% of grocery sales took place online, and shoppers weren’t enthusiastic about the concept of grocery shopping over the internet. A survey from Bain & Co. found that only 6% of consumers at the time planned to complete at least one online grocery order per month. Consumers hadn’t shown the same fervency for online grocery shopping as they had in other retail categories because the process was cumbersome and clunky. Deloitte had uncovered the central pain point almost a decade ago in a 2013 Supermarket E-commerce survey, saying that the reason why most consumers buy food, households consumables and personal items in a physical store is because “consumer packaged goods companies and retailers [had] yet to create a compelling online or mobile shopping experience for the majority of consumers.” 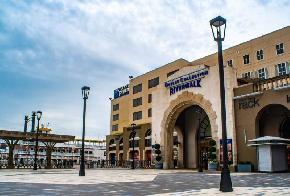 The sale of the 264,000-SF property nearly completes the firm’s strategy to dispose of all non-core assets.