The following column is from Rob Murphy, Vice President of Structured Finance and Capital Markets at Transwestern, a GlobeSt.com Thought Leader. The views expressed are the author’s own.

The rapid lift-off in rates over a short period of time has caught everyone’s attention. For commercial real estate, a higher rate environment can impact commercial real estate loans beyond making them more expensive. For sponsors, this could lead to reduced loan proceeds, diminishing equity returns and additional cash contributions into a deal.

To mitigate some of this risk, a sponsor may want to periodically spot-check their loan assumptions prior to approaching lenders for the loan request. If it cannot be avoided, it is better for a sponsor to quickly realize they are short on loan proceeds rather than to receive lender term sheets that fall short of the desired loan amount.

A sponsor can utilize a metric called the debt yield to size an approximate loan amount that will withstand lender scrutiny.

Some may think loan-to-value (LTV) covenants determine the loan amount for properties, but they work in conjunction with a debt service coverage ratio (DSCR) covenant that requires a property’s net operating income (NOI) to sufficiently cover the annual loan payment by a specified amount. For example, a DSCR of 1.25x would require a minimum NOI of 125% of the annual loan payment. The loan amount would reflect the lesser of the two amounts (LTV or DSCR) that could satisfy each covenant.

When the annual loan payment is set according to the DSCR, and loan interest rate and amortization assumptions are made, one can derive a maximum loan amount.. This entails a set of calculations based on the loan term, as well as different DSCR, interest rate and amortization requirements required by the lender. The calculation can get a little cumbersome, and a change in any one variable will lead to a different loan amount.

Consider this example, where a sponsor purchased a stabilized commercial property in January 2022 with the following terms: 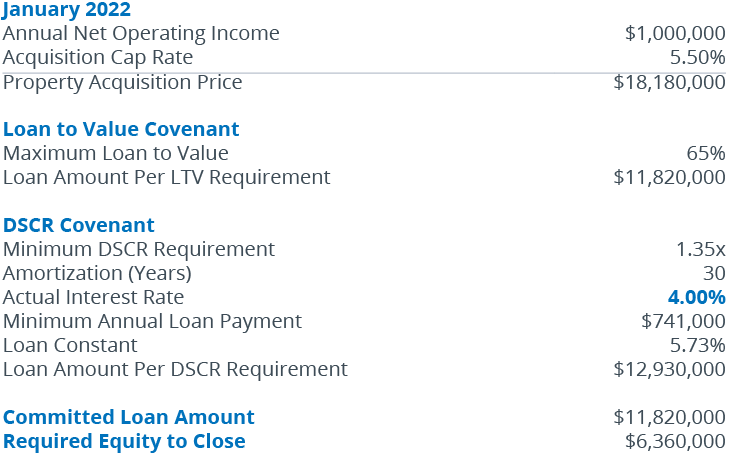 In this example, the LTV covenant is the limiting factor regarding the loan amount. The sponsor will have to provide $6.36 million of cash to close the transaction.

What if the transaction did not close in January 2022, but instead funded in April? This is how the loan sizing would look: 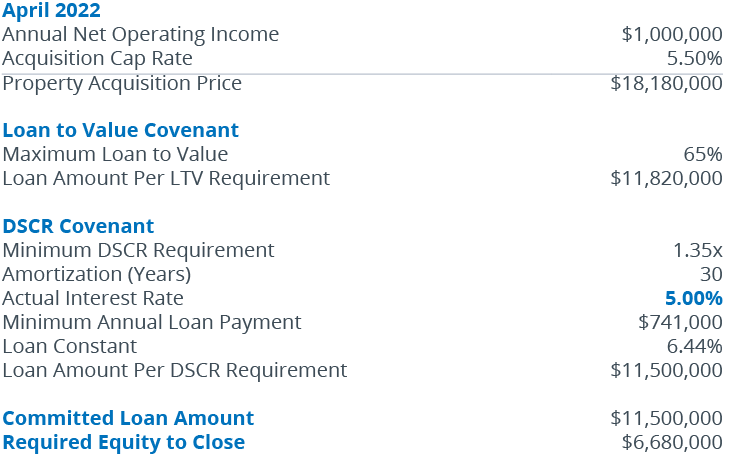 As you know, the treasury yield curve moved significantly during those months and pushed the interest rate from 4% to 5%. As a result, the DSCR covenant becomes the limiting factor with a total loan commitment of $11.5 million. Now, the sponsor must come up with an extra $320,000 because rates moved against them over those weeks. Also, did you notice April’s much higher loan constant? April’s higher loan constant and the resulting negative leverage really impairs the cash return.

The DSCR exercise illustrates the potential loan amount a property can support, as well as its sensitivity to variables including DSCR, amortization and interest rate.

Luckily, a perceptive individual saw the inherent relationship between all these variables and created a metric: the debt yield. It multiplies the loan constant (annual debt service shown as a percentage of the total loan amount) by the DSCR.  Since the DSCR is the lender’s requirement that NOI covers the annual debt service by a specified amount, if one multiplies the loan constant by the DSCR, one can derive the property’s NOI as a percentage of the loan amount, or the debt yield. Dividing the underwritten NOI by the debt yield will provide the loan amount (per DSCR calculation).

Using our previous examples, we derive the debt yield for the January and April loans:

Prior to this latest surge in interest rates, senior lenders were willing to provide maximum loan proceeds (utilizing a 1.20x – 1.30x DSCR) if the loans underwrote to a minimum 7% debt yield. This was possible due to the low interest rate environment where 3.5% money was readily available. With expectations that short-term rates are on their way to 3% by next year and long-term bonds selling off, it will be difficult for lenders to offer the same rates.

CMBS lenders are now quoting loans with interest rates well into the 5% range, thereby pushing minimum debt yields to greater than 8%. The same loans quoted last year would have had debt yields in the 7% range. These are becoming more difficult to come by and will likely be limited to stellar deals where lenders want to win the business with their most aggressive pricing. Debt yields for the other deals, where the sponsor is looking for maximum loan proceeds, will be north of 8%. Since debt yields and loan proceeds are negatively correlated, the higher debt yields infer lenders are cutting loan proceeds.

The sudden jump in interest rates over the last few weeks has caught everyone’s attention. If this rate environment is the “new normal,” sponsors in the market for commercial real estate debt may want to consider what higher debt yields mean for their desired loan proceeds. For sponsors on the fence about locking rate with a lender, the rate lock may serve as an additional hedge with respect to protecting cash in the deal. As sponsors get their arms around this market, the debt yield is a great metric to utilize.

Rob Murphy is Vice President of Structured Finance and Capital Markets. Based out of Los Angeles, he provides debt and equity placement services for Transwestern’s institutional and corporate clients nationwide.

Pay It Forward: How To Coach and Mentor Young Professionals for Career Success in CRE

Professionals are enthusiastic about welcoming new individuals into the commercial real estate business.