WASHINGTON DC-US Government approves the deal, which must be authorized by DC Council because it involves a single-source contract rather than competitive bidding.

Mayor Anthony A. Williams accepted Freedom Forum’s $100 million offer to buy one of the most prized development sites on Pennsylvania Avenue less than a month after the offer was made. The agreement came with the approval of the U.S. Department of Labor, which owns a two-thirds stake in the building for helping fund its construction in 1961. As part of the deal, the department agreed to take an equal share in the new facility to be built for the city’s Department of Employment Services, which occupies the site.

City officials would not discuss where they planned to move the department, fearing it could raise the price of the property.

Charles L. Overby, chairman and CEO of Freedom Forum, praised the mayor for moving quickly, beating a self-imposed deadline to provide an answer within 45 days. The nonprofit foundation wanted to know quickly whether the property was available so it could avoid extending its current lease in neighboring Arlington. That lease doesn’t expire until 2003. Real estate negotiations are known to drag on in Washington, however, which may have contributed to the eye-catching offer. The $100 million includes $75 million outright for the building, far more than its assessed value of $44 million. It also includes a $25 million donation for local affordable housing.

Freedom Forum plans to relocate its headquarters to 6th and Pennsylvania Ave. NW. It also wants to expand its museum on journalism, the Newseum, which has seen its total visitor count reach about 1.5 million.

It would redevelop the building with 300,000 sf for the museum, offices and conference center, build 30,000 sf of retail space, including a street-level restaurant and a Newseum gift shop, and build 100 condominiums in 140,000 sf.

Because the transaction would be a sole-source contract, rather than the competitive bidding process long considered for the property, DC Council must give the mayor permission to proceed. The Downtown Development Roundtable, a group of prominent local developers, some of whom have wanted to develop the building, wrote the mayor urging him to accept the offer.

Development to be centered at the former EDS campus in Plano, TX 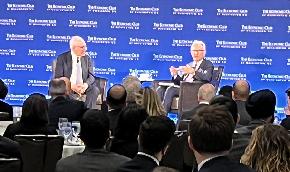 Experiential mall in Los Angeles to have 380 apartments, outdoor shops.