A rising Interest in investment properties this year is fueling sales of distinctive assets in metro area markets.

The sale includes a ground lease under the adjoining J.W.Marriott hotel. The building is 95% leased. Lead tenants are Ptek Holdings Inc. and Healtheon/WebMD. Class A rental rates in the tight Buckhead market are $27 psf.

In the second transaction, RREEF bought the 11-story, 286,572-sf, one-year-old Glenridge Highlands One office tower in north Fulton County from the Hogan Group of Tampa, FL for an estimated $43 million, or about $150 psf. The building is 100% leased. The parties in both deals wouldn’t disclose the contracted price until the sale is posted in local county offices as public record.

The high-profile Glenridge Highlands One building was north Fulton’s first office tower built at the interchange of the Glenridge Connector and Ga.400. The estimated construction cost of the asset in 1986 was $17 million or about $60 psf. Anchor tenants are HomeBanc and SAP America. North Fulton rental rates average $21.90 psf. Cushman & Wakefield brokered both transactions.

The 523,511-square foot office is located within Atlantic Station. 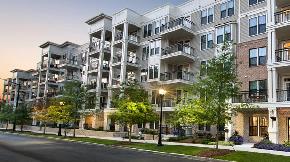