BorgWarner Cooling Systems of Michigan Inc. will build a research and development facility in Marshall, MI. The Michigan Economic Development Corp. encouraged the project by making a competitive business case to expand in Michigan with a Single Business Tax credit, an abatement of the six-mill state education tax and job training assistance.

BorgWarner selected Marshall over Indianapolis for its new high-technology research and development facility. The facility will create 180 new jobs, 59 directly by the company, for Michigan workers.

The new facility will house all of the company’s U.S.-based research, product and applications engineers and technicians. It will develop engine cooling system solutions for improved engine temperature management. The project includes a company investment of $7.7 million, with land, building, machinery and equipment costs. Of the new jobs, 121 spin-off jobs will be created from increased spending by people who receive income from the jobs at the BorgWarner Cooling Systems of Michigan Inc., according to an economic analysis done by the University of Michigan.

A key feature of the MEDC incentives package is a high-tech Michigan Economic Growth Authority tax credit, approved Tuesday by the MEGA board, worth an estimated $1.9 million over 10 years. MEGA, which is administered by the MEDC, is used to promote quality economic growth, job creation and retention in Michigan. In addition, the incentives package also featured an abatement of the six-mill State Education Tax for up to 12 years and job training assistance valued at $59,000 to attract BorgWarner Cooling Systems’ new research and development facility.

The project will provide over $7.5 million in revenue to the state over the life of the agreement, resulting in a net positive gain for the state of over $5.6 million after the MEGA credit. The project also is expected to generate over $94 million in personal income during that time.”The City of Marshall has enjoyed a long, successful partnership with BorgWarner,” says Marshall Mayor John Miller. “BorgWarner’s employees are highly skilled professionals – the type of employees who make a significant impact on a community and local economy. We are delighted to retain Ð and strengthen – this important relationship.”BorgWarner designs and supplies cooling system fan clutches and fans primarily for the sport-utility, light truck and commercial vehicle markets. The company currently has 244 employees in Michigan. 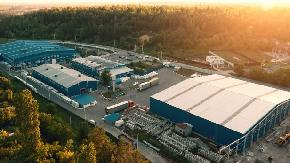