HOUSTON-Dirt's flying and the praises come in for the first high-rise office tower in Downtown Houston since 1986. The new skyscraper tells Houstonians: "This is for real.

HOUSTON-The 27-story, 5 Houston Center, the first high-rise tower to be built in Downtown Houston since 1986, is proof positive that the revitalization of that city’s booming downtown area is now more fact than fancy. Crescent Real Estate Entities will build the 577,000-sf building next to its existing Houston Center complex and connect the two with a skybridge.

At the ground-breaking ceremony, dignitaries had assembled before an architectural rendering of the new development bearing the headline, “Expanding the Dimensions of the Houston Skyline,” and that has been the theme of the project.

Downtown Houston had been stirring when the storied Rice Hotel had been resurrected. It took a great leap forward when Enron Field, the new baseball stadium had risen from the rubble. But, a new skyscraper tells Houstonians: “This is for real.”

“Crescent is delighted to continue Houston’s Downtown revitalization efforts while expanding the many amenities and services of Houston Center to yet another block,” says Jane Page, senior vice president, asset management and leasing for Crescent’s Houston Region office.

“Downtown occupancy rates for class-A space are at historically high rates, the demand for quality office space is growing, and we’re happy to be in a position to respond to our customers’ needs,” she says. Similar comments had hailed the new tower.

Houston City Council Member for District I, John Castillo, has commended Crescent for its commitment to Houston’s success and the Downtown revitalization. “The addition of this cutting-edge development to the Downtown environment is yet another benchmark for Houston’s growth,” he says.

Carl Baucum, head of Ernst & Young’s Houston office, says the proposed “high-tech Workplace of the Future office model will link perfectly with the high-tech environment planned for 5 Houston Center. We can’t wait to move in.”

He won’t have to wait long. Completion is scheduled for third quarter 2002. The skybridge to Chevron Tower will offer direct access to Houston Center’s existing 3.1 million sf of office space and amenities, including the retail shops, restaurants and a food court at Downtown Houston’s only shopping mall, The Park Shops, as well as the Four Seasons Hotel, the Houston Center Club and Houston’s underground tunnel system. 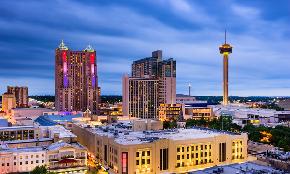