Yet Another Office-condominium Project Planned for North Scottsdale

PHOENIX-Another office-condominium project is under development in north Scottsdale, which has one of the tightest office markets in the Valley.

PHOENIX-A local development company is close to purchasing a parcel in north Scottsdale, where the company plans to build a 140,000-sf mixed-use project with office and retail space.

Real Alliance, a Scottsdale-based development firm, is expected to close by January on a 16-acre parcel at the southwest corner of Bell Road and Loop 101. The projected price for the parcel is nearly $9 million, according to industry sources.

Real Alliance plans to build a total of 40,000 sf of office-condominium space, of which 14,000 sf will be built in the first phase of development scheduled to begin in the first quarter. Four, 10,000-sf buildings are planned, with shell buildings priced at $170 per sf. Construction is expected to be completed by year-end 2001.

With the Scottsdale the office market tighting up, a number of office condominium projects have gotten under way. North Scottsdale has one of the tightest office submarkets in metropolitan Phoenix. At the start of the fourth quarter, the vacancy rate had dropped to 5.7%, compared to an overall vacancy rate of 9.7%, according to a study by CB Richard Ellis.

Caven Real Estate Investments is developing a 64,000-sf office-condo project just west of the northwest corner of Hayden Road and Thompson Peak Parkway in the Grayhawk master-planned community. The company plans to begin construction by year-end on eight, freestanding buildings on the site. Construction is expected to take seven months.

The Scottsdale office of Colliers Classic is negotiating the land sale at Bell Road and the Loop 101. 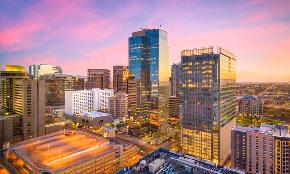