NEW YORK CITY-Don't cry doom and gloom just yet. Most experts see the industry surviving the coming economic hit. The question is exactly how hard that hit will be.

NEW YORK CITY-There’s been a definite downgrade in optimism over the state of the economy. The Nasdaq took another tumble Wednesday–dropping more than 200 points after a 300-point rally, with the Dow and S&P in freefall along with it. Uncertainty as to who will emerge from the presidential catfight has further undermined confidence. The cumulative result has been an undertone of doom and gloom lacing the conversations that took place during this past week’s heavy schedule of holiday networking events.

But most experts are telling GlobeSt.com that ledge-jumping might be premature. While just a few weeks ago, most industry-watchers agreed that a correction would be more a slowing of growth than a downturn, they’re saying now that the economy is in for some real bumpy weather. Nevertheless, the real estate industry should be relatively insulated from a severe shock.The fiscal stumble is “going to be hard and ugly,” one unnamed market observer tells GlobeSt.com. He says it’s never a good sign when “the stock market drives the economy rather than the economy driving the stock market. There’s a large amount of capital spending funded by equity offerings and high-yield bonds rather than by revenues.”

But David G. Shulman, managing director of Lehman Brothers’ equity research operations, counters that the industry should be protected from a downturn. “We’ll be fine,” he says. “In 1990, real estate was one of the main causes of the recession. If we have a 2001 recession, it’s going to come from tech and telecom, and real estate will be only a sideshow to the main event.”

Marcus J. Rayner, a principal with CRESA Partners, isn’t so sure, and he expresses concern about a ripple effect caused by the death of the dot-coms. Next in line would be the service industries associated with them. “That’s where it will hurt the overall economy,” he says. “It’s really too early to make a concrete prediction, but we don’t think it’s going to be very pretty. The problem will come if we tie the demise of the dot-coms to the financial services sector and their inability to tap into fees generated via IPOs.”

He does agree with Shulman, however, that generally speaking, a short and shallow downturn could actually be looked on as a good thing, especially given the imbalance between supply and demand. In addition, the space that would be returned to the market would be of a “good quality, vastly improved from the condition it was in three years ago.”

Simon Ziff, president of the Ackman-Ziff Real Estate Group, won’t make predictions beyond saying that there will be sales and financing activity as long as interest rates stay low. “But I wouldn’t say we’re insulated,” he offers. “There are other things in the economy that could affect occupancy.”

But some owners aren’t waiting around to see which way the market will fall, and Steven Bleiweiss senses a flurry of building sales in what describes as a take-the-money-and-run strategy. That being said, the corporate managing director of Julien J. Studley Inc. does believe the market is somewhat insulated. While he admits to a growing wariness on the part of owners, he also says that the bumper crop of demand will carry us through the worst of it. “I’m tracking 30 tenants whose total demand exceeds 15 million sf,” he reports. “I don’t see where that 15 million sf is going to come from.”

“My guess is that the national economy is going to be quite sluggish,” says Robert L. Freedman, vice chairman of GVA Williams. “But the New York economy is going to outperform the national, so while we’re not immune, I think we’ll be insulated. I argue very strenuously that the landing will be soft. Yes, there have been defaults, and there will be more, but the entire sector that can be classified under the heading of Internet accounts for no more than 5% of the overall market.” 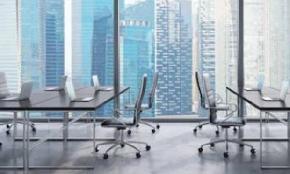