The local property involved in the transaction is the 74,764-sf Highland Fair shopping center in Gresham, OR. The mall is anchored by a Safeway grocery store and is 98% leased. The acquisition gives Aegis a total of two Oregon properties. Aegis already owns Holly Farm in Portland, a 112,617-sf shopping center that is 90.3% leased and anchored by Albertson’s and Staples.

The transaction is subject to Aegis’ stockholder approval and customary conditions, and both transactions are expected to close in the late spring 2001. Under the terms of the acquisition agreement, Aegis has agreed to pay POB and its investment partners total consideration of $203.5 million. The consideration will be comprised of: $3 million in cash; $58.4 million of limited partnership interests in Aegis Realty Operating Partnership, LP (“OP Units”), which are convertible on a one-for-one basis into Aegis common stock at a value of $11 per share and cannot be transferred for one year; and assumption of $142.1 million in non-recourse debt encumbering the acquired shopping centers.

The acquisition will represent the first transaction to be completed under Aegis’ long-term strategic plan to act as a consolidator of shopping centers. With the completion of this acquisition, Aegis increases its equity market capitalization by 62% and its gross leasable square footage of shopping centers by 88%. In afternoon trading Thursday, Shares of Aegis stock were trading at $10, off 18.75 cents from Wednesday’s close and off 87.5 cents from its 52-week high of $10.875, achieved on May 5th of this year. 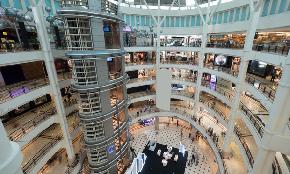 Creating Malls Where Visitors 'Never Run Out of Things to Do'

Consumers are demanding more from their shopping and dining experiences, post-pandemic.