LOS ANGELES-The City Council here has given unanimous approval to locally based J.H. Snyder Co.’s plans to develop NoHo Commons, a $218-million mixed-use project that the builder promises will turn a blighted area of North Hollywood into a bustling center of commerce.

The 1.2-million-sf office, residential and retail project will rise on a 23-acre parcel next to the Metropolitan Transit Authority’s subway station at Lankershim and Chandler boulevards. Construction should begin late next year, with completion 12 to 18 months later, a J.H. Snyder spokeswoman says.

The deal approved by the City Council includes $43.9 million in various types of government loans and grants to offset part of J.H. Snyder’s development costs. More than half of the aid—about $27 million—will come from the U.S. Department of Housing and Urban Development and other federal agencies.

NoHo Commons is considered the cornerstone of efforts by the city to redevelop North Hollywood’s tired urban core. The project’s original developer, J. Allen Radford, nearly four years ago proposed a $1-billion, 4-million-sf mixed-use project that would include office and retail space, sound stages and a hotel.

Radford cut the size of the proposed project in half last year, eliminating the sound stages and hotel. He then brought in J.H. Snyder Co., the company headed by prominent builder and dealmaker Jerry Snyder, as the project’s controlling partner.

Seeking to get the project back on a fast track, Jerry Snyder and his development team soon reached an agreement with two key groups of labor and community activists to pay a “living wage” for most of the 2,000 jobs that the development is expected to create. Terms of the pact call for at least 75% of the jobs to pay a minimum of $7.99 an hour.

Snyder also agreed to build a childcare and job-training center inside the project, and to set aside eight acres of the parcel for a new high school that would be owned by the LA Unified School District. The developer’s concessions helped to build public support for the ambitious project, as well as the financial aid package Snyder needed to get construction under way.

“We promised we would make this project a reality, and do it quickly,” a jubilant J.H. Snyder Co. senior partner Cliff Goldstein said after the City Council vote. “In a matter of months we’vecreated an entirely new project” that will succeed despite today’s tough economic environment, Goldstein adds.

When finished in late 2003 or the first half of 2004, NoHo Commons will include about 810 rental apartments and lofts, 228,000 sf of retail and restaurant space, at least 200,000 sf of offices and parking for 3,461 cars. The first of the two-phase project will include the rental housing and retail space, Snyder’s Goldstein says.

The project’s design represents a collaboration of two of the nation’s best-known architectural firms; Venice, CA-based Jerde Partnership and Santa Monica-based VanTilburg, Banvard and Soderberg. Jerde’s work includes the wildly successful Horton Plaza shopping mall, which many experts have credited for launching a renaissance in Downtown San Diego that began in the 1980s and continues today. VanTilburg has won numerous awards for its work on urban multifamily projects across the US.

J.H. Snyder has developed more than 4 million sf of office space—most of it in Southern California—as well as 1.3 million sf of retail and about 40,000 residential units. 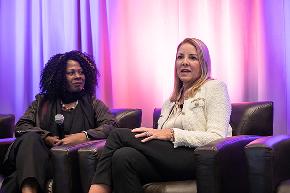 The Secret to Margaret Caldwell’s Success? Her First Five Years.

The Stan Johnson Company director and managing partner spoke about the importance of those formative years at the 2022 GlobeSt. Women of Influence event.