Headquartered in San Francisco, Ross is an off-price retailer with 409 shops in 17 states. Ross looks for an average of 30,000 sf of space located in neighborhood shopping centers for their new stores.

The 16th store will be located at Baytown Shopping Center. Ross recently inked a lease for a 32,000 sf space at the neighborhood center with Kimco Realty. Ross also negotiated a lease for its 17th store from Trammell Crow at Texas 290. The 30,187 sf store is planned for a second quarter 2002 opening. Dean Lane of Houston-based Boyd Page represented Ross Dress for Less in both lease transactions.

The first parcel is approximately 12 acres at US 10 West. Beltway 10, North Ltd. was the seller of the tract. The second parcel, also located at US 10 West was 1.78 acres purchased from Sam’s East Inc. The Great Indoors is currently operating in nine states. 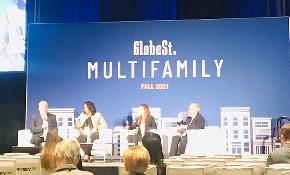 What Multifamily Developers Learned From the Pandemic

Panelists at the national GlobeSt. Multifamily Conference offered insight into what is to come and lessons learned.

76% of builders rated the overall supply of developed lots in their regions as low to very low⁠.