Oil Tycoon's Office-Fortress Being Restyled for Corporate Use

MONTGOMERY, TX-An 87,000-sf atrium office building and 40,000-sf underground bomb shelter are being made over into a corporate campus. The complex, valued at $20 million, was built in the 1980s by a nephew of Madame Chiang Kai-shek.

MONTGOMERY, TX-After a year of ownership, Curtis Development is within weeks of a construction start on a major refurbishment of one of the region’s more unusual properties: an 87,000-sf atrium office building and 40,000-sf underground nuclear bomb shelter.

The 15-acre holding is located in Montgomery, a suburb north of Houston. The former Westland Oil Building, now called Westlin Building, is a piece of local history. The fortress-complex was built in the 1980s by Ling-Chieh “Louis” Kung, a wealthy Houston oil tycoon and nephew of Madame Chiang Kai-shek. Kung, said to be a direct descendent of Confucius, came to the United States after attending England’s Sandhurst Military Academy and serving as a major during World War II.

Gary Goff of Curtis Development in Montgomery tells GlobeSt.com that he has letters of intent for more than 50% of the complex, but is still keeping open the option to sell the holding to a user for a corporate campus after the renovation is complete in third quarter 2002. Goff estimates the property’s value at $20 million.

Kung was a Chinese diplomat in Washington, DC and later moved to Houston. In 1961, he founded the Westland Oil Development Corp. In the early 1980s, he relocated the operation to Montgomery and set about building the office complex.

The property had state-of-the-art security facilities at the time, Goff says. Motion detectors and electric fences are long gone, but the bullet-proof glass is intact. The bomb shelter is large enough to hold 1,500 people and supplies for up to 90 days, including bed space, kitchen and surgical area. The shelter was Kung’s insurance against possible nuclear attacks by Red China or the Soviet Union.

Kung lost title to the complex in 1987 during the oil industry bust, driving the company into Chapter 11 bankruptcy. The building stood vacant until Curtis Development bought it a year ago.

Goff says a medical research company, imaging company and hazardous waste removal company for the railroad industry have inked letters of intent for the space at the building. And one company has signed for 50% of the bomb shelter to house a data center. Goff explains there is an emerging need in the post-Sept. 11 world for companies to make their data not only virtually secure, but physically secure. He anticipates tenants may want to restore some of the old security systems put in place at the campus. He says interest in the property has increased since the attacks.

Goff says the office building is “a great entertainment facility,” boasting a full-service commercial kitchen and restaurant area on the first floor. It also is designed with a spa, exercise rooms and outside swimming pool. The campus is located in the wooded area on Highway 105 across from Lake Conroe, close to the Walden Resort on Lake Conroe.

The Series-E round is to fund further development and expansion. 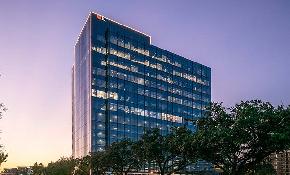