PHOENIX-In an ongoing disposition of its Arizona holdings, Canadian-based Anthem Partners releases the title to the Northbank Office Building on the fringe of the Camelback Corridor. International Capital Partners is the buyer. Another Anthem building is under contract.

PHOENIX-A Canadian-based investment group unloads another office property in Phoenix in an ongoing disposition of its Arizona holdings. Anthem Partners Ltd. gets a little more than $3.6 million for the 31,286-sf Northbank Office Building at 5110 N. 40th St.

International Capital Partners is the buyer of the 19-year-old building, which is 90.5% occupied. Handling both sides of the deal was an Insignia/ESG team that consisted of Dennis Desmond, senior managing director; Trevor Klinkhamer, managing director; and Adam Tolson and Mitch Chilton, both directors. The office building was under contract within four weeks of coming to market in an offering that attracted several interested would-be buyers, says Desmond.

Desmond says Anthem just feels “it is time” to sell off its Arizona holdings. Grubb & Ellis Co. is holding a contract for the investment group’s Lincoln Center, an office property at the intersection of Scottsdale and Lincoln, Desmond tells GlobeSt.com. The Insignia team previously sold Anthem’s 290,000-sf Scottsdale Executive Villas as part of the disposition.

Anthem held title to the multi-tenant Camelback Corridor property for the last three years. It is located north of Camelback Road in the historically well-performing corridor.

The Insignia team structured the sale through an ongoing relationship with the buyer as well. The deal marks the third completed by Insignia on International Capital Partners. 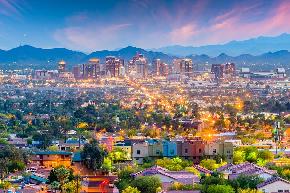