SEATTLE, WA-When the deal closes ten months from now, Amgen's acquisition of Immunex will include nearly $1 billion in Puget Sound real estate. It pledges to hang on to some properties but has made no decision about the $150-million Bothell facilities.

SEATTLE, WA-Included in the most pricey bio-tech acquisition ever–Amgen’s $16-billion acquisition of Seattle-based Immunex Corp–is nearly $1 billion in Puget Sound real estate and another $1 billion in Rhode Island factories. While Amgen has made pledges to keep some of the properties acquired in the transaction, including the $750 million project on Seattle’s waterfront, continued ownership of a 150,000-sf facility in Bothell is yet to be determined.

GlobeSt.com discussed the real estate aspects of the acquisition with Rebecca Hamm, a spokesperson with Amgen, headquartered in Thousand Oaks, CA. GlobeSt.com was unable to reach Immunex officials for comment, as its executive offices are closed until after New Year’s Day.

Hamm confirms that after closing sometime in late 2002, the company plans to retain both Immunex’s Rhode Island factories and the $750-million Helix Project, a new headquarters campus under construction at Terminal 88 in Seattle’s Interbay area.

Ground was broken last March on the first phase of the massive Helix development. When completed sometime in late 2003, the campus will contain 1.3 million sf in seven buildings, including 828,000 sf of offices and laboratories. Prior to the deal with Amgen, Immunex had foreseen the potential development of the entire 29-acre site, depending upon the extent company’s growth.

While Amgen appears to have been able to come to conclusions about Helix and Rhode Island, Hamm says the global company is undecided about the future of Immunex’s 150,000-sf facility in Bothell. “It’s much too early to even be talking about it. None of those decisions really have been made yet,” says Hamm.

The Bothell campus was first opened in 1992 with an 80,000-sf laboratory and 20,000 sf of factory space. It was built at a cost of $70 million. Just this spring, a new 50,000 sf plant was delivered to provide expanded production capability. The cost: another $50 million. Altogether, real estate sources estimate the property’s total current value at $150 million.

There was no answer as to when a Bothell decision may come, but as to who will make the decision, Hamm says, “There is an integration team that has been put together with Peggy Phillips, Doug Williams (respectively Immunex’s COO and CTO several members of (Amgen’s) executive committee.” 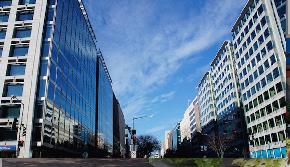