ESTERO, FL-Naples-developer the D'Jamoos Group is seeking zoning approval for Estero on the River. The project would rise on an 85.3-acre site which is currently zoned for agricultural use.

ESTERO, FL-Naples-based developer the D’Jamoos Group is seeking approval for Estero on the River, a $300-million mixed-use project on an 85.3-acre site on the northeast corner of Corkscrew Road and US 41.

The project will include up to 530 residential units, including garden condominiums, village apartments, townhouses and single-family homes. There will be 300,000 sf of commercial space, including 52,500 sf of general office and 34,500 sf of medical office space; 177,000 sf of retail space, which includes a 100-room boutique hotel; and 36,000 sf of space for civic use. The centerpiece of the project will be a regional theater called the Gulfshore Playhouse, with a 550-seat mainstage proscenium theater, a 150-seat studio theater and a Children’s Learning Institute.

The land is currently zoned for agricultural use, but a Lee County Commission hearing to consider rezoning the land is expected to be held in the fall.

Andy D’Jamoos, vice president of sales and marketing for the D’Jamoos Group, tells GlobeSt.com that in past years the site, which contains some old buildings on it, had served as a downtown area. “There’s a lot of history to this corner. It was the downtown for the community,” D’Jamoos says. “It gives us an opportunity to revive what was traditionally downtown.”

The project employs smart growth principals consistent with Lee County’s policies. The project incorporates a “smart village” approach whereby development is built around a “main street” that contains office and retail space. The development is designed so that residents can live, work and shop in the same area.

Another feature of the project will be a pedestrian trail/riverwalk that will meander along the 50-ft buffers and landings and/or decks that will be strategically placed out over the bank of the river. A 75-ft greenway spine will connect the residential areas to the river buffer. 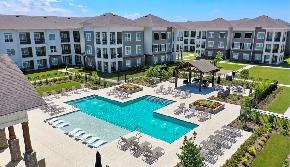