REDLANDS, CA-The buyer of the 90,472-sf shopping center is an Bernardino-based Hyrosen Properties, which acquires it from Newport Beach-based SCP Redlands LLC.

REDLANDS, CA-Hyrosen Properties of San Bernardino has acquired the 90,472-sf Orange Tree shopping center from Newport Beach-based SCP Redlands LLC for $23 million, according to Sperry Van Ness. The property is located near the 10 and 30 freeways at the southwest corner of Alabama Street and Lugonia Avenue.

The Sperry Van Ness brokers who negotiated the deal report that the transaction represents one of the largest retail centers ever purchased by an Inland Empire-based investment group. The Sperry Van Ness team of Brad Umansky and Bryan Ley from the company’s Ontario office and Fouy Ly of Sperry Van Ness in Irvine represented the buyer and the seller.

Built in 2006, the five-building center is situated on 7.3 acres and is 100% leased to tenants including Marshalls, Jo-Ann, Starbucks, CitiFinancial, Subway, Ono Hawaiian BBQ and others. According to the Sperry Van Ness team, the buyer was attracted to the center because it is new construction with 82% nationally recognized tenants within a strong retail corridor.

The center is across from Majestic Realty’s Citrus Plaza, which includes Target, Kohl’s, Sport Chalet, Michaels, Petco, Barnes & Noble and Bed Bath & Beyond. It is also close to other existing and planned retail in the area.

A report from Sperry Van Ness cites the appeal of the Inland Empire for investors as the region “continues to benefit from the skyrocketing home prices in more western areas of Southern California.” While the Inland Empire’s cost of living is still higher than in many parts of the country, it “pales in comparison to that of Los Angeles and Orange County,” a factor that continues to drive growth and, in turn, demand for retail, the Sperry report says. 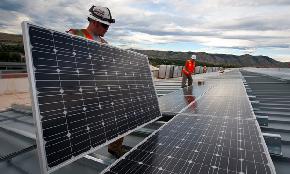 In about 16 months, new commercial and high-rise buildings will require photovoltaic panels and storage batteries.