WILL COUNTY, IL-The RidgePort Logistics Center-Chicago, being developed by Ridge Property Trust, will have up to 3,000 acres.

WILL COUNTY, IL-A business park is being developed in unincorporated Will County, near the city of Wilmington, by a partnership between Ridge Property Trust, based in Chicago, and the Burlington Northern Santa Fe Railway Co., with corporate headquarters in Fort Worth. RidgePort Logistics Center-Chicago will be located at the intersection of Interstate 55 and Lorenzo Road and will consist of between 2,000 acres and 3,000 acres, says Doug Hayes, vice president with the REIT. The value of the 15-year project is more than $1.6 billion, which “is just our part of it. It does not include the railroad’s end of it because they are still up in the air with their plans,” Hayes says.

The business center will have more than 20 million sf of industrial space when fully built. The park will have both speculative buildings and build to suit facilities. Ridge hopes to begin construction by late summer on the first building for the park, which will be a spec facility with slightly more than one million sf. The building is expected to be completed by summer or fall of next year. Hayes said he could not release asking lease rates, but the average rate for warehouse use is $3.84 per sf, according to a Grubb & Ellis Q1 report. The business center will have rail-served buildings. The railroad is “beginning work on their main line that goes through there and are looking to put more tracks into their current right of way,” Hayes says.

Between 40 acres and 50 acres at the front of the business park at the interchange for I-55 will have commercial and retail space. The retail is expected to be restaurants, hotels and other businesses that would service the park occupants.

Ridge has been acquiring parcels of land for the park for the past 2.5 years. The area was chosen because it has 2.5 miles of frontage on BNSF’s transcontinental rail and three miles of frontage along I-55. The rail line “comes directly from the L.A. Long Beach port into Chicago, so it is a direct route,” Hayes says. In addition, there was already an interchange at I-55 and Lorenzo Road and the park will be near BNSF’s intermodal park in Elwood, Hayes says.

The REIT currently owns 1,600 acres at the site and BNSF owns “a few hundred” acres, Hayes says. “We are in negotiations with some of the other landowners,” he says. “It could be up to a maximum of 3,000 acres.” Ridge is working with Wilmington city officials to have the business park annexed into the city, Hayes says. The park will generate new sales revenue of $63.5 billion in Illinois with more than $32.6 billion in Will County, according to estimates from Ridge. The project is estimated to create more than 28,580 new jobs in Illinois with more than 12,040 jobs in Will County.

There is a huge demand for this type of business park right now, particularly in the Midwest and Chicagoland area, Hayes says. “It is predicted through L.A. Long Beach, by the year 2030, there will be 59 million containers per year that will pass through that port alone,” he says. “That is compared to 13.1 million containers that went through the port in 2004.” 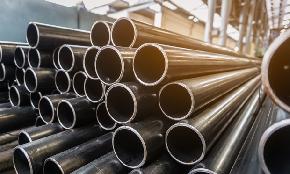 Steel Prices May Be Heading Higher in the Near Future

A combination of demand and lower global production is the reason.