PHILADELPHIA-During a "cooling off" of the condo market and rising demand for rentals, the developer of the 128-unit complex in Manayunk changes course.

PHILADELPHIA-Venice Lofts, a multifamily complex on Venice Island between the Schuylkill River and Manayunk Canal that broke ground as a condo project in mid-2005, has been converted to rental apartments. In late 2006, the developer, locally based Dranoff Properties, decided that rather than sell into a declining market, it would lease the complex’s 128 units.

“People, especially young people, are a little frozen now,” says Carl Dranoff, owner. “The condo market is unsettled, and they’re exploring their options. In addition, there are people who are unable to sell houses in the suburbs. There is pent-up demand for rentals, and that market is strong.

“We’re owner/operators, and we have the financial capacity to sustain an investment. We’re leaders, not followers with a history of being ahead of the pack, and we’re nimble,” he says. “We made a very thoughtful, deliberative decision, and we didn’t want a fragmented community, so we returned condo deposits and actually have retained some of those buyers as renters.

“Owners and renters often have different needs, and a fragmented community doesn’t fit with our luxury brand of properties,” he continues. Dranoff has developed numerous multifamily projects here, both rental and condo. Of Venice Lofts, which is located in the Manayunk neighborhood, he boasts, “there is no more superior product outside Center City.”

The project cost, initially estimated at $45 million, rose to $50 million with added amenities. Dranoff tells GlobeSt.com that renting at Venice Lofts is pacing at about 15 units a month and 50% of the units are now leased. Rent rates range from $1,600 to $3,200 a month. The previous selling prices were listed from the upper $300,000s to the $700,000s.

The 3.3-acre gated community is within walking distance of the neighborhood’s Main Street of upscale shops and restaurants. The complex includes 38 townhouses in three converted textile mill buildings and 90 units in a new mid-rise. Units have nine-foot ceilings and high-end finishes and fixtures, and the complex includes parking, a fitness center, clubhouse and catering kitchen.

Dranoff’s rental properties in University City and the Symphony House condo tower on the Avenue of the Arts in Center City substantiate his claim to be ahead of the pack. Symphony House just opened more than 85% pre-sold. Of the city’s current condo market, Dranoff says, “it’s cooling off. While it’s not as robust as in 2005, it’s holding up very well in comparison with other parts of the country.” In addition to the early timing of Symphony House, he also says, “we established numerous procedures to prohibit investor buying. It is the investor segment of the market that has fallen out.”

Several planned condo projects have recently been put on hold and some developers have put land and plans up for sale. As GlobeSt.com previously reported, Opus East is another developer that shifted gears. Instead of building a 39-story, 292-unit condo at 1919 Market St., it is developing a 14-story, 257-unit residential rental property. 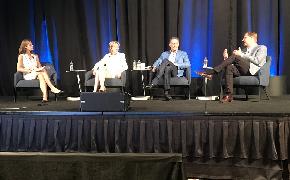