BOSTON—PivotDesk has brought the concept to more than two dozen markets, including Boston's Innovation District; the company's Alex Newmann will discuss the platform at RealShare Boston next week.

BOSTON—Given its long-established tech and life sciences sectors, and its appeal to venture capital, it’s hardly surprising that Boston is thriving as a launching pad for startups. And given its appeal to startups, it follows that the city is among the markets for the rapid expansion of Boulder, CO-based PivotDesk, which the company’s Alex Newmann describes as “an office-sharing marketplace.” He’ll talk about how the concept is a natural fit for Boston commercial real estate during a panel discussion on the office market at RealShare Boston, scheduled for Tuesday, Sept. 9 at the State Room

Newmann, who joined PivotDesk in 2012 when the company was itself a startup and is now its VP of sales, sums up its mission: “We connect people who have the space, for whatever the reason, with startups that need space but either can’t afford, can’t find or don’t really know what they want, so this is a good short-term solution” via an online platform. 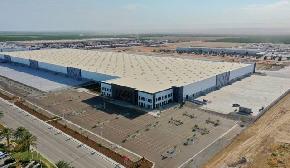 GlobeSt. exclusively learns that the food manufacturer intends to use the facility as a distribution center to sort and ship goods across the western region.