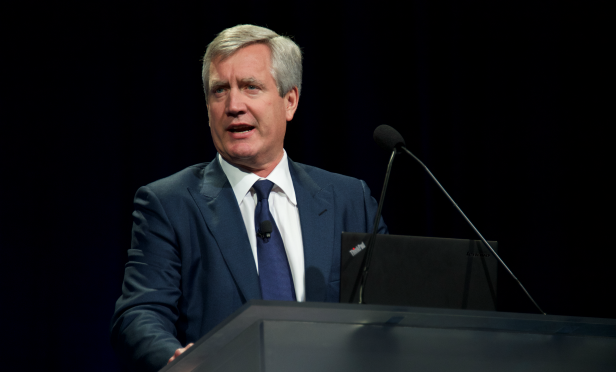 Michael Van Konyeneburg, president of Eastdil Secured, took a goldilocks view of the economy at the annual Allen Matkins View From the Top conference this week. Van Konyeneburg gave the economic outlook speech at the opening of the conference, providing a comprehensive economic overview supported by a wealth of research from Eastdil Secured. Despite rising interest rates and an acrimonious upcoming midterm election, he sees a well-balanced market with a long list of positive economic stats.

Rising interest rates are among the concerns of the investment community. The Fed has increased rates several times this year, and will likely raise rates an additional one to two times this year, according to Van Konyeneburg. However, he was not concerned, contrasting the rising US rates with low global rates. “There are $7 trillion of sovereign wealth funds that are zero or negative yield,” he said. “We are focused on how high our rates have moved over the last year, but it is in context with how low rates are around the world.” In addition to this international view, Van Konyeneburg added that rising interest rates are also a sign of a growing economy. “[Rising interest rates] are still very benign, and this is also in light of the fact that we have a lot of positive economic numbers: GDP, unemployment, consumer confidence, household net worth, small business optimism. There is a lot of great news,” he said.

Unemployment, which has been inching down consistently, is now at 2000s numbers; weekly unemployment claims are at a 50-year low; and there are officially more total jobs available than there are people looking for work. “That shows a lot of strength in the labor market. We have a very positive job market, and it is finally leading to wage growth,” he said. Consumer confidence—perhaps driven by low unemployment and wage growth—is at an 18-year high. Consumer spending drives 70% of the economy, making this a strong indicator of economic outlook.

The fund will support the creation of 1,800 permanent supportive housing units for people experiencing homelessness in Los Angeles.

The lack of available labor has been a larger factor in project delays than the materials.