Salesforce Transit Center was closed yesterday after a fissure in one of the steel beams was discovered in the ceiling of the third level bus deck near Fremont Street, and inspections are underway.

SAN FRANCISCO—The Bay Bridge bolts, Millennium Tower foundation and now the Transit Center‘s cracked beam have Bay Area residents scratching their collective heads about the structural integrity of the newly built orifices in the city. Indeed, the nearly centuries-old structures such as the trusty Golden Gate Bridge, Coit Tower and Palace of Fine Arts seem to be more solid that some of the newer, shinier counterparts.

Salesforce Transit Center was closed yesterday after a fissure in one of the steel beams was discovered in the ceiling of the third-level bus deck near Fremont Street. Out of an abundance of caution, the Transbay Joint Powers Authority/TJPA, after conferring with design engineers and contractors, temporarily closed the transit center as the agency works with Webcor/Obayashi and structural engineers Thornton Tomasetti to investigate and repair this issue, and conduct an exhaustive inspection of all steel beams throughout the center. These inspections are currently underway.

The company has purchased Sunrise Village in Fullerton, CA, which is currently anchored by a CVS. 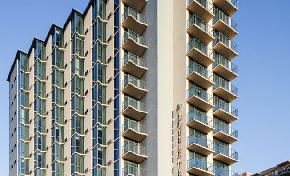