The development’s first tower, designed by Corwil Architects, will feature 312 apartment units and 6,000 square feet of retail in a 22-story building, will break ground in July.

MIAMI—Ground has broken on the multi-phased Link at Douglas mixed-use project here that when completed will feature approximately 1,500 housing units and a redeveloped Douglas Road Metrorail station here. Construction on the development’s first two tower buildings, totaling 22 and 36 stories, will begin this summer.

Link at Douglas is being developed through a collaboration between Miami-Dade County and developers 13th Floor Investments and the Adler Group. The 13th Floor Investments-Adler Group partnership has entered a ground lease for seven acres of publicly-owned land in Coconut Grove that will foster a transit-oriented development, as well as privately-funded transit and infrastructure upgrades within the county’s transit system.

The project, which will be built in phases over the next five years, will include 1,500 residential units, including a workforce housing component, 25,000 square-feet of retail space, a 250,000-square-foot office building, and a public plaza that connects with The Underline, a 10-mile-long linear park running from Downtown Miami through neighborhoods to the south. The Link at Douglas’ mobility plan includes connectivity to Metrorail, county buses, and municipal trolleys.

No firm development cost for the mixed-use project was released. The full-build out of the development and the transportation-upgrades are expected to be completed by the mid 2020s.

A groundbreaking ceremony for the start of initial site work at the Link at Douglas project site was held on Monday, April 15 and featured Miami-Dade County Mayor Carlos A. Giménez, Miami-Dade Director of Transportation and Public Works Alice N. Bravo, P.E., and principals from the project’s development team. Vertical construction of the development’s first phase is expected to begin this summer.

“As Miami-Dade’s population experiences rapid growth, we need to come up with forward thinking ways to reduce road congestion and that begins with connecting people with alternative forms of transit,” says Arnaud Karsenti, managing principal of 13th Floor Investments. “Link at Douglas will set a new standard for urban living in this part of Miami-Dade County, improving access to jobs, attainable housing opportunities, everyday amenities, retail and office space for our residents and neighbors.”

The development’s first tower, designed by Corwil Architects, will feature 312 apartment units and 6,000 square feet of retail in a 22-story building, will break ground in July. The development of tower two will begin in October. The 36-story building designed by Arquitectonica, will include 421 apartment units and 17,000 square feet of retail. Approximately 100 of the 733 units in the two towers will be designated as workforce housing units.

“We are thrilled to partner with Miami Dade County in further enhancing the community through this pedestrian and transit-oriented development,” says Michael M. Adler, CEO of Adler Group. “By focusing on design, public spaces and the connection to transit we feel that this project will enrich all of Miami Dade County.”

Adler Group and 13th Floor Investment’s site plan incorporates more than $17 million in public infrastructure improvements with $1 million being put towards the development of The Underline linear park. The development team states that the Link at Douglas development is expected to generate $500 million in new revenue for Miami-Dade County. 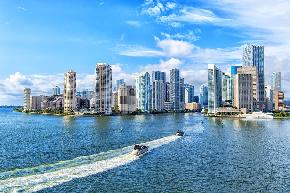 In the last two decades, Florida’s downturns in the rental market have seen 7% average rent declines.

The buyer plans for the investment to be a long-term hold for us as it continues to make acquisitions in South Florida.