TUCSON-Capping off an eight-year planning process, the University of Arizona has launched construction on its 54-acre Bioscience Park. The initial phase involves infrastructure, and upon build-out, the project will support up to 2.4 million square feet of laboratory and office space, a science and technical high school, hotel and conference center and university housing.

The Bio Park, as it’s dubbed, is located at 36th Street and Kino Parkway near Interstate 10. A $4.7 million grant from the U.S. Department of Commerce, Economic Development Administration is fueling infrastructure development including streets, water, sewer, gas lines and telecommunications. The infrastructure will be in place by early December 2010. What happens following that depends on the success of leasing efforts, according to Bruce Wright, University of Arizona’s associate vice president for university research parks.

“We’ll start our marketing efforts in late spring and are looking to attract bioscience, medicine and similar companies into the Tucson region,” Wright tells GlobeSt.com. He says the university and Lincoln Properties is in discussion with several tenants, adding that if any one of the three tenants comes on board, “we would start construction within the next 12 to 24 months.” That first phase calls for approximately 700,000 square feet of office, laboratories and conference space.

Wright explains that a concept for a biosciences-related research park with a commercial component started about eight years ago, with four of those eight years geared toward actual planning, such as acquiring the property, developing concept plans and securing approval from the Arizona Board of Regents. He says a specific budget cost hasn’t yet been determined, though the division of duties has been set.

While the university will oversee non-commercial space such as educational and residential uses, Lincoln Property and its team will handle the commercial side. Companies working with Lincoln Property include NBBJ of Seattle and the Tynan Group and Green Idea of Phoenix. Local companies on the project include Planning Center, Piper Jaffray’s local office, Sundt Construction, Picor Commercial Real Estate and Kimley Horn & Associates.

“University of Arizona is one of the top 10 research universities in the United States and about a third of our contracts are in the life sciences area,” Wright says. “This Bio Park can help us move the technology out of the university and into the marketplace.” 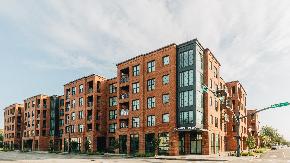 The firm has sold the additional equity interest in a 1.1-million-square-foot Boston property to an existing joint-venture partner.