NEW YORK CITY-The eight remaining residents living in the footprint of the Brooklyn mega-project have reached agreements with Forest City Ratner Cos.

NEW YORK CITY-Forest City Ratner Cos. said Wednesday it has reached agreements with the last remaining residential holdouts still living in the project footprint of its Atlantic Yards mixed-use development, all of whom faced eviction. Agreements with seven of the residents were announced Tuesday afternoon, with the project’s most vocal critic, Develop Don’t Destroy Brooklyn founder Daniel Goldstein, reaching a separate agreement on Wednesday.

Goldstein is not named in the FCRC statement, which identifies him as “the remaining resident residing in the project’s footprint,” but in a DDDB statement he confirms published reports that he has agreed to vacate his condominium by May 7 in exchange for a $3-million payment. He has also agreed to step down from his role as spokesman for DDDB, which has opposed the project since 2004, and has also removed his name from the last lawsuit pending against the project.

However, Goldstein says he remains a member of DDDB and will continue to speak out against the project. He also disputes a characterization of the payment as a “sale” of his condo, noting that the property was seized by the state last month.

“We are not going to discuss the details of the agreement,” an FCRC spokesman says in the statement. “Forest City Ratner has from the start worked very hard to compensate and to assist residents who owned or rented homes in the footprint. They made that commitment at the start of the project over six years ago and today are very pleased that as construction is in full force they were able to accomplish that goal.”

Goldstein says that he and representatives of the Empire State Development Corp., which had seized title to his property through eminent domain last month, met with State Supreme Court Justice Abraham Gerges, who encouraged both sides to come to a settlement. Gerges had ruled in favor of the state last month, writing that he found “no merit” in any of the 14 motions brought by Goldstein and local businesses.

In the statement, Goldstein says “I have always promised that once the legal options to save my home and the homes and businesses of my neighbors were extinguished, I would have to turn my attention to what was best for my family, after years of neglecting our interests. That is what I did on Wednesday.” He told the Brooklyn Eagle on Wednesday that much of the $3-million payment for his condo will go toward legal fees.

The seven residents with whom FCRC reached agreement on Tuesday all live in rental units, and FCRC EVP MaryAnne Gilmartin says in a statement that the company will help them find new housing.

“If the individuals or families that live in these rental units wish to move into the first new residential building at Atlantic Yards, FCRC will cover the difference in their rent during the interim period,” according to the statement. “For those who wish to relocate on their own, FCRC is paying on average $80,000 to the former lease holder and $5,000 to assist with relocation.”

Earlier this week, another prominent holdout, Freddy’s Bar and Back Room, announced that it too had reached an agreement to relocate from the project’s footprint. In a statement, manager Donald O’Finn says, “The owner of Freddy’s has had to consider those employed at Freddy’s as well as his own situation, needing employment and food on the table. He made a difficult decision to pull out in such a way as to keep the contents of the bar and move it into another location. If we wait for condemnation we might sacrifice too much.”

Groundbreaking for the $4.9-billion project took place last month. First phase of the project to be constructed will be the Barclays Center, an 18,000-seat arena that will eventually house the Nets basketball franchise. It is scheduled for completion in 2012. 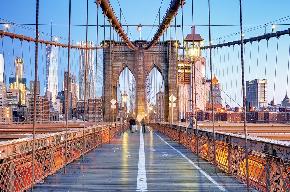