LA Passes Seismic Retrofit Ordinance - What You Need To Know

The City of Los Angeles has unanimously voted to pass the Seismic Retrofit Ordinance, which mandates structural strengthening of vulnerable buildings in an effort to protect the city against major losses in case of the next major earthquake.

The City of Los Angeles has unanimously voted to pass the Seismic Retrofit Ordinance, which mandates structural strengthening of vulnerable buildings in an effort to protect the city against major losses in case of the next major earthquake. The LA ordinance, which is expected to go into effect in the first half of 2016, will require the seismic retrofitting of the city’s most vulnerable building types:

The LA seismic retrofit ordinance forms part of the City’s “Resilience By Design” plan, which is one of the country’s most ambitious plans to improve earthquake resilience, and also includes measures to secure water supply and communications infrastructure.

In many ways LA’s ordinance mirrors the mandatory soft-story retrofit ordinance of San Francisco that went into effect in 2013 but LA’s law is magnified in both scale and scope – and will have a significant impact on the City’s property owners, investors, brokers and lenders. Let me address a few questions I’ve received in recent days.

How do I determine if a building is affected by the ordinance?
The city has pre-identified approximately 13,000 buildings and has created an inventory of addresses based on research conducted via online tools, city records, and in site visits performed by city officials. The city will provide notification and guidance to owners about when this becomes active.

Engineers can usually tell by simple evaluation of the building configuration if a soft story or weak story condition exists. Occasionally, design calculations must be performed to determine this.

What if a building has been retrofit in the past – will it require additional strengthening? This is uncertain as the city has not provided specific guidance regarding this. It is expected that buildings that have undergone seismic strengthening and retrofit after 1997 will be more likely to be approved or grandfathered in, however, the construction documents and design calculations may be required to prove the prior work is adequate to meet the new standards.

More detail about which buildings will be subject to the ordinance can be found here.

What’s the expected timeframe for implementation?
The time limit for compliance are listed as follows:

Within 1-year after receiving notification that a building must be retrofitted under the ordinance, the Building Owner must submit to the Building Department a structural analysis and or plans that demonstrate compliance or include the proposed structural alteration to meet the requirements of Division-93

Within 2-years after the notification is received, obtain all necessary permits for rehabilitation or demolition.

Within 7-years after the notification is received, complete construction or demolition work under all necessary permits.

How much will a retrofit cost?
The cost of such retrofits vary widely and can range between $20k to $250k per building. Costs are totally dependent on the specific building configuration and scope of work required to meet the performance objectives. Until engineered designs are complete, it is difficult to define the exact financial burden of a mandatory retrofit. Engineers and contractors that specialize in seismic and structural strengthening work can provide the best guidance. All buildings are different, and unique design characteristics or complexities will impact the cost of a retrofit.

Who will bear the costs of mandatory retrofits?

The costs will be borne by owners, tenants, and possibly the state. Retrofits can be costly, and finding creative financing solutions will be critical to the minimizing the impact of the new ordinance. Ultimately, retrofitting is likely to be cheaper than obtaining earthquake insurance and certainly cheaper than dealing with losses caused by damage in case of an earthquake.

New funding and financing options are being developed to offset the cost of implementation, such as:

For more information on financing options, see this GlobeSt.com blog “Who Will Pay For LA’s Seismic Retrofit Ordinance“

We will provide updates and address additional questions surrounding the mandatory retrofit ordinance in coming days, so be sure to check back to The Science of Real Estate. 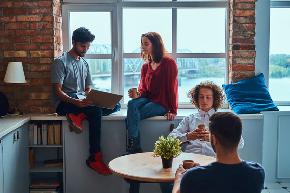