“The space has exploded,” Gary Bechtel of Money360 says on the financing panel at RealShare Apartments. 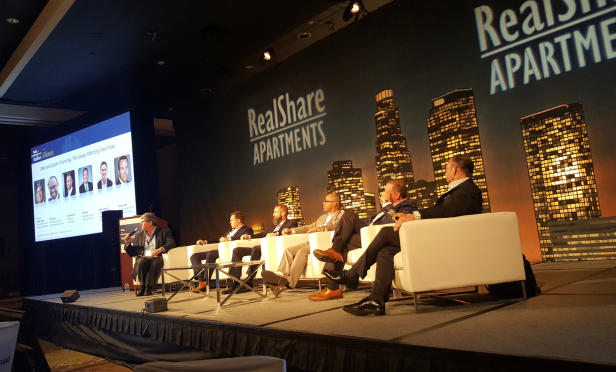 The bridge lending space has exploded, Gary Bechtel, president of Money360, said on the Debt and Equity Financing: The Issues Affecting Deal Flow panel at RealShare Apartments this week. He estimated that there are 130 to 150 bridge lenders in the space, serving a wide range of spreads and deals. Gary Tenzer, co-founding principal at George Smith Partners; moderated the panel, which included speakers Jordan Goforth, director of Ready Capital Structured Finance; Jerome Fink, co-managing partner of The Bascom Group; Jason Haye, national sales director at Velocity Mortgage Capital; and Jeff Burns, managing director of Walker & Dunlop, along with Bechtel.

Goforth and Fink are seeing the same growth in the bridge lending space. Goforth said that deals with strong cash flow are, of course, the most popular and are getting bid down; however, even bridge lenders even have a strong appetite for deals without cash flow. “Competition on all of these deals is huge,” he said. Fink added that even with the increase in bridge lenders, he hasn’t seen any lender that hasn’t been able to perform. Instead, he said the biggest challenge is filtering through the amount of bridge debt available.

With so many bridge lenders active in the market, every niche is being filled. Most are focusing on the $5 million to $40 million range, but Goforth said that there is a lot of activity in general in the sub $10 million. That is a space where is firm saw big opportunities in the market only a few years ago, and today it is being saturated by competition. Lenders are responding to the strong borrower demand, which is not only coming from the value-add space, but from construction debt that is maturing or that needs to bridge during lease-up or from bridge debt that is maturing. “We have a bridge product in house for every agency out there,” added Burns about the activity. “I have done more of that product in 18 months than ever before.”

All told, 47% of respondents said they have accessed federal rent relief funds in at least some of their areas of operation.