Is Vapor Intrusion Ruining Your Transactions?

The potential liability and impact of vapor intrusion issues has been of increasing concern to developers and lenders alike. Partner Engineering and Science's Tom Daly looks at some of the ways you can manage this risk.

The potential liability and impact on property value due to vapor intrusion into a property’s structures has been of increasing concern to developers, lenders and other parties involved in commercial real estate transactions. Recent changes in ASTM International’s ASTM E1527 standard regarding site investigations, and in the U.S. Environmental Protection Agency’s All Appropriate Inquiry requirements, have now greatly increased the likelihood that vapor intrusion risk will be explicitly addressed by consultants in Phase I Environmental Site Assessments. The prior ASTM E1527-05 standard for Phase I ESAs has now been revised by issuance of ASTM E1527-13, “Standard Practice For Environmental Site Assessment: Phase I Environmental Site Process.” By revising the definition of migration and by other changes, the standard clarifies that vapor intrusion is to be considered in Phase I ESAs.

The U.S. EPA is required by law to use technical standards (including test methods) developed or adopted by organizations such as ASTM International, unless using such standards would be inconsistent with applicable law or would be impractical. When ASTM International revises a standard such as ASTM E1527, it submits the standard to EPA for review. EPA then undergoes a formal review process and, upon approval, EPA issues a Rule approving adoption and use of the revised standard. ASTM International submitted the revised ASTM E1527-13 standard to EPA for review and, on August 15, 2013, EPA issued a Direct Final Rule amending its All Appropriate Inquiry requirements to reference the ASTM E1527-13 standard and to allow for its use in complying with the AAI rule. However, due to negative comments received by EPA during the public comment period, EPA withdrew the Rule on October 29, 2013.

It is expected that EPA will republish the Rule after it addresses the received comments. It should be noted that approval of the use of ASTM E1527-13 does not mean that EPA requires that the revised standard be used. Previously approved standards such as ASTM E1527-05 may continue to be used to meet the AAI requirements.

An analysis of the increasing impact of vapor intrusion risk assessment on commercial real estate transactions was recently provided by members of a vapor intrusion panel at an environmental law symposium conducted by the Los Angeles County Bar Association in Santa Monica, California. Present on the panel were representatives from the commercial real estate industry; the environmental consulting industry; and from the California Department of Toxic Substances Control (“DTSC”), the agency with direct control and authority over property investigation and cleanup issues in California.

The discussion centered on the desire to address potential market stigma impacts from vapor intrusion and to develop risk management strategies to enable closure of real estate transactions. The consensus of the panel members was that parties involved in commercial real estate transactions should develop a strong working relationship with regulatory agencies. This was considered essential in light of continually evolving standards being considered by the DTSC to address vapor intrusion and other issues.

The DTSC has issued various guidance documents regarding vapor intrusion issues, including its “Final Guidance For the Evaluation And Mitigation of Subsurface Vapor Intrusion To Indoor Air,” issued in October 2011. Under this guidance, the DTSC requires that human health risk be evaluated at sites under its oversight and that, if volatile chemicals are identified as being present, exposure from vapor intrusion should be included in a human health risk evaluation. However, as identified by the DTSC toxicologist participating on the panel, the DTSC is continuing to develop strategies to address vapor intrusion from on-site and off-site sources. It was stated that one potential change may be more stringent monitoring requirements at sites affected by vapor intrusion, including the possibility of requiring passive monitoring for weeks at a time.

Strategies were also discussed by the panel in order to manage risk and to achieve successful closure of real estate transactions. Panel members emphasized that risk management should include communication with regulatory agencies, buyers and tenants regarding environmental conditions and risks; establishing institutional and engineering controls where necessary to mitigate impacts; and enhanced due diligence if uncertainty remains after controls have been put in place.

The panel’s discussion echoes a trend throughout the industry of heightened concern regarding the potential liability and impact of vapor intrusion issues when buying or selling real estate assets. Recent revisions to the standard for Phase I Environmental Site Assessments has placed greater emphasis on the evaluation of vapor migration, and the industry is developing strategies to address the new requirements. I would add to the panel’s discussion that if a vapor concern is identified, there are relatively cost-effective next steps to evaluate the severity of the problem that don’t have to necessarily kill the deal, such as a Phase II Environmental Site Assessment that includes soil-vapor testing. For new construction, developers may want to consider taking precautionary steps towards vapor mitigation such as installing vapor barriers as this can be more cost effective than retroactive measures.

The bottom line is that a comprehensive real estate due diligence process that incorporates vapor intrusion and migration concerns will enable developers, lenders and buyers to close real estate transactions with minimal environmental risk. 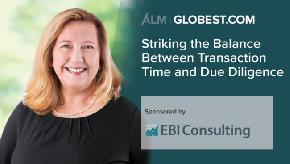 Striking the Balance Between Transaction Time and Due Diligence

With the right advisory team, multifamily investors can have it all: a swift transaction timeline and risk mitigation.